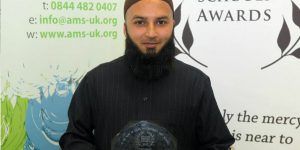 Arif Abdurrahmaan, the Assistant Headteacher at the London Islamic School (LIS), a Muslim Secondary school for Boys, situated at Esha’atul Islam Ford Square Masjid, Tower Hamlets, has been awarded the AMS UK Secondary Non Teaching Staff of the Year 2012 award on Saturday the 24th March 2012 in a prestigious gala conference in Leicester attended by over 400 delegates..

The Association of Muslim School (AMS) established in 1992 is the UK Muslim Schools hub who work to support and develop excellence in UK Muslim Schools, they have over 150 national member schools so to achieve this award is great significance and importance to the school, pupils, borough and community at large. The awards were judged by a panel of senior Muslim educationalists including an Ofsted Inspector who followed three criteria; 1) The staff who has made an outstanding contribution or demonstrated innovation in their role.  2) Commitment and dedication to the school. 3) Evidence of going above and beyond the call of duty in assisting the school, staff and students.

The AMS UK said ‘Our judging panel deemed that Arif has made an outstanding contribution in his role as Administrator and Teacher. The judges were particularly impressed by the extra responsibilities and projects initiated by Arif, the pivotal role he played in supporting the development of students and the commitment and dedication he has shown to the school in going above and beyond his job description, the award is richly deserved and may Allah Almighty accept his efforts’.

Arif Abdurrahmaan, who has been working at LIS since 2007 has been the initiator of many school development projects. He founded a voluntary sector youth group named ‘Maximising Unity and Leisure (MUL)’ run from the school premise benefiting the students and the wider community through an after school club arranging accredited workshops, football projects for various age groups playing in the local league and Key stage 3 and 4 educational support classes for the students and wider community. He also founded and initiated annual Inter-Madrasah Championships in athletics, football and forthcoming dragon boat racing, hifz, qiraat and writing which are now organised under a shurah board made up of 1 representative from each of the 6 boys secondary madrasahs in Tower Hamlets.  Other projects he initiated was a tarbiyyah system consisting of daily, weekly,  monthly, quarterly and yearly acts to increase spirituality of students, a career skills assessment framework to assess students in year 10 and 11 to aid parents and students in making a decision about the students future pathways based on their academic ability and spiritual state as well as balancing learning with fun with innovative extra curricular educational programmes including an interfaith world religions workshop at the Emirates stadium and a football project with ex professional footballer turned Hollywood actor, Vinnie Jones.

An overwhelmed Arif Abdurrahmaan said ‘I do not accept this award as an individual award, rather I accept it as a school award as I could not have done this without the support of the Headteacher Abdulhadi Mamon, Deputy Head Mawlana Inham and the staff and students, so I accept it on their behalf.  I pray Allah accepts our intentions and efforts and hope this award is a motivation for us to continue our hard work for the students, for they are our future and our sadaqah jaariyah’.

The Headteacher of London Islamic School, Ustadh Abdulhadi Mamon said ‘Ustadh Arif Abdurrahmaan has worked tirelessly and passionately beyond the call of duty for the betterment of the students and school at large, I am extremely pleased that he has been recognised not just locally, but nationally for his efforts and pray he continues with the hard work he is doing at the school.’

London Islamic School is continually growing and has recently been through a successful inspection in March 2011 obtaining an overall ‘Good with outstanding features’.  The school has also gone through an expansion project after obtaining access to a new section on the 1st and 2nd floor, please check our website for further information regarding the school. The Management request your prayers for the school and its students.